We were in Tiberias, Israel for a missions trip with YWAM. During one of our free evenings we were supposed to meet for dinner with a lady that we had recently met at the grocery store, but she couldn’t make it at the last minute. We proceeded with dinner anyway and we were led to a cute, casual sandwich joint. The owner was very friendly and he could speak English, so we hit it off right away. As we continued chatting throughout the night, we noticed that his friend who was sitting at another table was listening to us, so we joined him. He was very friendly and transparent about his life and the struggles he was facing. He was a 23 year old (that makes him 25 now!) Russian Jew who had recently completed serving in Israel Defence Force. He and his wife were divorced and they had a little boy together.

We soon discovered that he had been searching for the Truth and he loved reading books, so we gave him and his ex-wife some Hebrew literature. We met up with him for the last time before we left for Jerusalem and the Holy Spirit led us to give him a Hebrew New Testament Bible and he was extremely appreciative. Three months later, we received an email from him and he shared that he had become a believer in Yeshua!!! Our local contacts in Tiberias confirmed with us that he was truly saved and plugged in to a messianic church! Leading the lost to Jesus is such a privilege and leading His very own chosen people to Yeshua is part of fulfilling the prophecy that us Gentiles are to provoke the Jews to jealousy (Deuteronomy 32:21, Isaiah 65:1, Romans 11:11), so that they will repent and put their faith in Yeshua! Alleluia!

Miracles of Healing and Salvation

Another cool testimony was from our honeymoon in Maldives. We were renting snorkelling equipment from the main dive instructor, and we learned that she had an accident with her ear, so she hadn’t dived for a few months. We went back to borrow some equipment on another day and we asked if we could pray for her. She was willing, so we laid hands on her ear and prayed for her. A few days later, we saw her and she said her ear was completely healed and she could dive again! Praise the Lord!!! On the day of our departure, I went to say goodbye to her. I gave her a hug and told her that Jesus loves her and she just smiled back at me.

Since being in Windsor and serving at Lazarus Outreach Centre from last June, we’ve been blessed with the opportunity to do street ministry on Tuesdays. One of my most memorable encounters was witnessing to two female students at the University of Windsor campus with Pastor Gilles. From the onset, I noticed that something was bothering one of the students, so I asked her what was wrong. She shared that she had a toothache, so I asked if we could pray for her. I laid hands on her cheeks and asked Jesus to heal her. After praying, I asked her how she felt and she said she was feeling much better and her face lit up! At this very moment, we shared the Gospel with both of them and they chose to follow Jesus that day!!! Praise the Lord!

As I bring this post to a close, I want to get back to the current situation/circumstance we are in. As I had mentioned earlier, we were supposed to be in Denver, Colorado by now, or so we had hoped. We had been raising funds over the last four months but the Lord didn’t provide all the funds we needed, so we could not go. When I first learned about this, I was really devastated and it took me about a week to hold my emotions together. The first thing I did was doubt that David and I had really been hearing from God because we would not have pursued such a great undertaking if it were not His will! The devil began spewing lies in my head and tempting me to doubt God’s character. I had also come to realize that I felt devastated with the situation and with God because I had trusted Him conditionally. I had trusted Him to not let this happen and it did!

So what do you do in such circumstances? You continue waiting on God. That’s exactly what we are doing. We have been waiting to pursue seminary education since last April. We are still waiting on God and we are trusting in His direction instead of doubting. The origin of the word ‘wait’ in Hebrew refers to (1) ‘bind together (by twisting); (2) ‘wait’ is linked to the idea of piercing, (3) to carve, to entrench (to dig or cut a trench around a place, as in fortification; to fortify with a ditch and parapet). When the Lord delays in answering our prayers, He is not saying no. He is saying “Wait, not yet My child.” His delays do not mean ‘no’, but His delays actually means ‘wait’. In other words, when He is asking you to wait, or like our situation, making you wait, He is really inviting you to cling to Him, to bind yourself to Him. When the Lord makes a promise to you, He actually binds Himself to the oath and He will never ever break it. On the surface, nothing seems to be happening, it feels like everything is on hold and you are not moving at all. But we have to trust Him and believe that Daddy is doing something behind the scenes for us. He is preparing the way and making a way even when there seems to be no way. And at the set appointed time, He will bring it to pass if you remain in His will and stay on course. So the question is – will you cling on to Daddy?

My dear sisters, especially those who are facing crossroads or struggling with waiting on God, I pray that you will trust in the Lord with all your heart and lean not on your own understanding. In all your ways acknowledge Him and He shall direct your paths. Remember that He who calls you is faithful, who also will do it (1 Thessalonians 5:24)! God bless you! 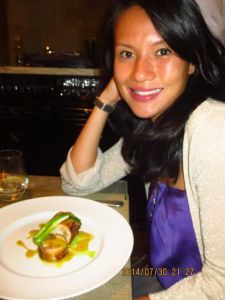 Pascale is a daughter of Father God, a lover of Jesus Christ and she is joyfully married to David Colucci. She’s a foodie and coffee enthusiast. She also enjoys travelling, reading, cooking, baking, dancing, running and wake-boarding. Pascale met her husband David while serving in the Alpha programme at an international fellowship in Shanghai, China in 2011. Their journey as vocation missionaries began with YWAM in New Zealand in 2013 and has led them to Lazarus Outreach Centre in Windsor, Canada since 2014, where she ministers to the oppressed and teaches the Word of God. Pascale has a heart for youth and women. She desires to bring them hope and inspiration through the Gospel, the supernatural love and power of Jesus Christ and her personal testimony. The Lord has been leading Pascale (and her husband David) to pursue seminary education as a stepping stone for future ministry. Since November 2013, Pascale is dreaming with God to establish a multi-faceted ministry to combat sex-trafficking across the nations.

“My greatest desire is to love and obey God, be on fire for Him, exalt Jesus Christ with my life, impact the nations and bequeath a spiritual inheritance for the generations succeeding me.”- Pascale Colucci